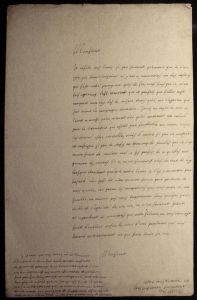 So, I put that essay in a manilla folder to guard the fragile onion skin, and I turned it in the next day.  Quite uncharacteristic of me to finish an assignment the night before it is due – – my best work now completes the morning of.  I remember that Mrs. Gibbon liked my essay and gave me some gentle ribbing about the red ink – – saying something like I would be saving her the trouble.

She graded the paper according to the rubric she had determined ahead of time – – a rubric that we had when writing.  Another rearview teaching lesson from a master?  Yes.  My intuitive teaching style was informed by mimicry for years and I still value it as a legitimate way to learn.  But what I remember most about Mrs. Gibbon was that she cared about an insecure boy who missed his father and was starting to pull away from his mother.  Mom’s gravity is strong and the launch that began in middle school would become critical.  That launch and many other things would yield a crippled ship, but one that had escaped.  Mrs. Gibbon and my big sister influenced the way that I view women more than my mother did and thankfully so.  A critical task for a boy growing stronger is to see women as God does – – equal partners – – to be respected.  I learned that some girls in my class were smarter than me and many were more eloquent.  Mrs. Gibbon was clear that she expected us to take turns leading and following – – and that my best response to a woman in authority over me was to give my best effort and complete respect – – yes ma’am.  I don’t know if she was a Christian, but she taught me how Jesus feels about women — in general, and at work.  My sister?  She taught me how to hold doors.  She said it still mattered even though she was smarter than most of the young men in college.  Yes ma’am.

Sixth grade was so hard and Mrs. Gibbon made it better.  I’ve tried to press in to my sons during Middle School – – P3 starts in August.  I needed Dad in ways which required physical presence.  I needed time.  Time is the currency of discipleship.  Time humbles us all and reveals our deepest priorities.  Beggar and billionaire have exactly the same amount each day.  Can I fill the unforgiving minute with sixty seconds worth of distance run?  So sixth grade brought a difficult transition helped by a teacher that cared.  I think I got an “A” on the paper – – I honestly don’t remember.  I remember thinking that I let her down by not winning the contest.  She smiled and explained the scope and odds then asked me something I’ve asked many students since.  “Was that your best?”  I could honestly answer “yes”.  “Then, I’m proud of you.”  I don’t remember if she hugged me, but thirty years later the impact was the same.  One reason your story affected me so much?  At this point of my life I needed and received appropriate attention.  Mrs. Gibbon was not a vocal Christ follower, but she was Jesus to me.  The vocal Christ followers in your life betrayed you.  I was sick with sadness.

My difficulty began in earnest the next year when there was no Mrs. Gibbon and the years of Dad’s commuting dragged on.  A postscript to this story that I haven’t thought about much until recently?  I won the contest.

This is a friendly dialogue between a Christ-follower and an atheist. You are welcome here. Relax. Consider. Join the conversation.
Follow russell & pascal on WordPress.com

Russell (the atheist)
View all Russell's posts
Pascal (the Christ-follower)
View all Pascal's posts
%d bloggers like this: